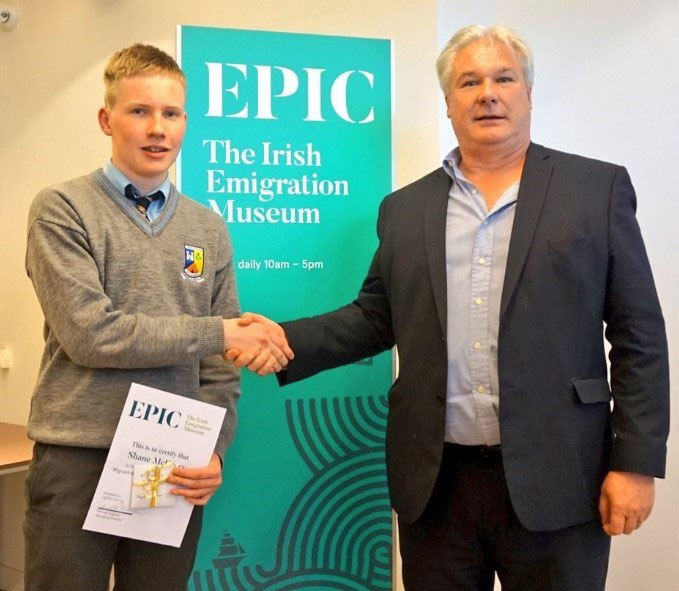 Shane McEnery, a third-year student at St. Patrick’s Secondary School Castleisland was announced this week as the overall national winner of The Irish Emigration Museum’s competition, ‘Migrant Memories’ which was run in conjunction with the Irish Independent. Shane along with other members of his class entered this competition under the guidance of their teacher Ms Monica Murphy. Shane’s biography of his grandfather captured many of the emotional aspects of emigration and the challenges and opportunities often met with in equal measure and was selected as the overall competition winner on that basis. Shane along with his class and teachers will travel to The Irish Emigration Museum to collect his prize. The following is the winning essay;

Migrant Memories……………………………………..by Shane McEnery
My Grandfather was born in a small townland outside of Abbeyfeale, Co. Limerick For eleven years, he worked on the home farm with his brother Louis and sister Theresa. After this, he left to live in another area, surrounding Abbeyfeale with his Grandmother. He stayed with her, labouring the land and doing all the necessities that had to be done. Family and friends were a huge part of my Grandfather’s life. Back then, people relied on neighbours, cousins and friends to come and help with more heavy duty jobs on the farm such as the cutting of silage or making of hay. In my Grandfather’s early twenties, he began working on building sites. As part of his work, he was involved in the construction of buildings in the expanding town of Abbeyfeale and its surrounding areas. However, he was struggling to make ends meet and so he made the life-changing decision to move to England in the years after the Second World War. And so, he left with the price of a ticket and only the clothes on his back. London, the largest city he had ever seen, was waiting for him. He was welcomed by the new sights and smells of this exciting, bustling city. It was also the centre of all military co-ordination. World War Two was on the brink of finishing and Axis Power was diminished. There was an air of hope in the city and my Grandfather tried to feel part of that..

He quickly got a job on a construction site and the long hours helped to suppress the loneliness that he was beginning to feel. Life was much different to back home. The warning of Air Strikes was a far cry from the church bells of sweet Abbeyfeale. However, he knew he had to adjust quickly to his new life. At first , he was all alone and felt he didn’t have much in common with his work mates who had never heard of the small town of Abbeyfeale . He couldn’t talk to people about Gaelic Football and he yearned for the banter with his friends outside mass and the ‘post mortem’ chats after the local
football match. He tried hard to adjust but his heart was at home in Ireland. He felt in utter exile.! On the day the war ended 8 May, 1945, Churchill granted a public holiday to celebrate the end of the war and there were celebrations on the streets of London and all over Europe. VE day (Victory in Europe Day), commemorated the unconditional surrender of Nazi Germany to the Allied forces which ended the War. My Grandfather took the tram into London to see the Queen’s parade around the city and came across an Irish pub where he met a large group of Irish men. He was delighted to be invited to a dance that was being held in a nearby hall a few weeks later. He saved to buy a new shirt and shoes and at last he began to feel to belong. It was at the dance that he felt at home the most. The traditional Irish jigs and reels lifted his spirits and so he decided to persevere and stay on in London for a few years more.

On 9 th June, 1957, When he got holiday leave from work, he finally bought a ticket for the boat home. He arrived to a new and more modernised Ireland but more importantly, he was reunited with his family. The time he spent at home made him think about his future and whether he was going to return to London or stay at home and start a family of his own.

Again, he left for London but this time it was going to be different. This time he met another Limerick woman Kathleen who was to become my Grandmother. They married after two years and their first son, Richard, my Father was born, a year later.

Grandad, felt London was not a place to rear children however and so he returned home for good and bought a farm in the Cork/Kerry border. His first purchase was a tractor and later a horse and now content to be back where he belonged, he never looked back. This time, he was home to stay and seven more children were to follow. He never regretted returning home which was like a magnet to him when he was ‘in exile’ in London. Everything fell into place on his return home as he knew he had made the right decision.

Sadly, my Grandfather passed away a few years ago but his memory still lives on and the stories he told us about post-war England will be treasured and never forgotten.